My Review and Interview – Richard Smith

I’m pleased to introduce my guest, London based author, Richard Smith, today on Thursday Interviews.   He is a Young Adult author and has written two well-researched juvenile fiction books, called ‘The Darziods’ Stone’ and ‘Time Trap’. I asked Richard what inspired him, really where he found inspiration for his first two books, and this is what he said: “Regarding Time Trap, two of my passions are time-travel and Victorian London, so it was inevitable I’d write a book combining the two aspects. So the old adage, write about what you like and know, definitely applies here. I used the same adage to The Darziods’ Stone to a degree; I have a soft spot for Cornwall (half of the story is set there) and I like conspiracy theories, there’s nothing like a good mystery to unfold.

I read both your books and I agree: When you write about what you know and love, the results are often spectacular and successful.  Then too, receiving inspiration from someone as close as your mum, Sylvie, who always encouraged you to write, instilling the power in you not to ever give up, has proved a powerful writing tool, too.

I’ve seen that you have a wonderful knack for weaving a story in and out of a modern to an ancient setting and even into the future.  Tell us more about how much research you do, and how do you decide which research is relevant to the development of the overall plot?  Do you set accurate backgrounds or do you allow for some artistic leeway?
To me, research is very important. For Time Trap, I read many books on London in the Victorian age, especially the 1860’s where the book is set.  As for The Darziods’ Stone, I actually stayed at a cove in Cornwall after looking for one in books and on Google, which I had in mind. I eventually opted for Polkerris, (Par PL24 2TL) on the southern coast, a perfect place to base my cove on. I stayed there for hours to get the feel, all the while writing my observations. When I wrote about the cove, I did it with conviction.
Again, weaving a story on writing what you love and know – even if it means going to the spot to get the feel, really helps to create a very ‘real’ background, as is the case of the cove and its often eerie descriptions in ‘The Darziods’ Stone’, which have quite and interesting and diverse plot.  Do you plot the plot – the time-line and so forth – beforehand?
Time Trap was a very meandering journey. I chopped and changed so many times and the final edit is the third plot. For The Darziods’ Stone, once I reached halfway with the plot, I began writing the story (big mistake!). When I reached the half way stage, I came to a grinding halt, I had nowhere to go and actually mothballed it. I was inactive for two years, but during this time, it nagged away at the back of my mind. The nag become an urge, so I wrote two plots and chose one. Once I got started again, I actually finished the book with a flourish.
You mentioned that you won’t repeat this mistake. You’re working on the plot for your third book  – a sequel to ‘Time Trap’ – as we speak, saying: “but this time, I won’t start until I know exactly where the story is going.”  Please tell us more about how much time you spend on your writing endeavours each day (actual punching on keys, research, making notes, proofreading – really tell the readers about your creative process).
My writing is very sporadic, I write when I get the urge to. I might go a few days not doing anything, but then I would go on a charge and write every day for a fortnight. I always have a notebook on me for ideas and reminders, which I think every writer should do.  When I was a young writer (from 10 to around 15) I just used to write using very little research, but if I could go back, I would have studied books on writing techniques. For an example, Show not Tell is a very important aspect, and it took me a while to grasp it. I think getting to know the meaning of nouns, pronouns etc – what I call the nuts and bolts of writing – is also important.
What makes you ‘tick’? Hobbies, interests (obviously other than writing!:-))What challenges are there to write successfully for juvenile readers? And which categories would you say describes both your works the best?
I like going to new places, whether it’s the UK or abroad. I’ve been to a few places in Europe, the further afield countries are: India, the US and New Zealand. I like to experience the different cultures and meet people.  I also like food, and so like to cook. A new recipe is a new challenge. I usually do a good job when cooking something new.
Yes, I believe you like tasty beef stew with dumplings.  Perhaps you might like to share your secret ingredients and recipe with us, someday? 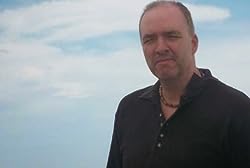 Richard Smith’s motto is: Never give up; it can happen. And his first book, Time Trap, and now ‘The Darziods’ Stone’ is proof of that. Born in London, the youngest of three children, Richard has loved writing stories since he was 10; and regularly got top marks for his essays at school – where his favourite subject was English. After leaving school, he worked in a succession of dead-end jobs. None brought him as much satisfaction as writing – which he kept up, with his mother’s constant encouragement. Richard credits her father, a taxi driver, who enjoyed writing as a hobby, for his talent with words.
Researching and writing ‘The Darziods’ Stone’ took seven years, including several periods of inactivity, but with his mother’s words – never give up – ringing in his ear, he pulled out all the stops and completed it with a flourish. With his brother George providing the cover and the drawings, and Pat Richardson giving the ms a final edit – just as they did with ‘Time Trap’ – Richard is very happy with the book.
Time Trap II will be his next yarn, which he looks forward to writing. Jamie and Todd will be embarking on another adventure, time-travelling to 1776, America.

Time-Travel Trip of a Life Time!
ByMarethMBothaon November 8, 2017
Format: Paperback
The author, Richard Smith has done everything needed to hook younger readers, both boys and girls (in my opinion) with TIME TRAP – a time-travel tale which takes the reader from modern London to the London of 1862. The book, beautifully printed in a bigger font – ideal for younger readers – has over 300 pages, a few well-chosen sketches, a map and begins with a question: “Who wants to be in a street gang? Jamie does!” And because of this obsession, Jamie needs to get one of his popular footballer friends, Todd, to back him if he wants to be in the Riverside Posse. It also mentions a few secrets, which as we know, everyone who loves a good story would love to solve.
The two boys, Jamie and Todd, spend a weekend at Jamie’s Uncle Simon’s strange house in London – as part of the deal to join the gang – and there Jamie sees his “two ghosts” for the first time. (This sighting moves the plot, even though his uncle and Todd don’t believe him). Jamie’s deal (to join the Riverside Posse) does not come cheap and to get Todd’s backing, Jamie takes him to see a secret laboratory – somewhere inside the British Museum – on a miserable, stormy afternoon. They’re fascinated by a strange-looking contraption. While the two boys have a closer look, a thunderbolt strikes, rendering the two boys momentarily unconscious.
When a bright light which blinds them, subsides, they are shocked to find themselves in a different London and before they have time to recover, they are being chased by thugs, the police and a band of ragged children. From here, the two boys live by their wits as they face danger around every turn. They are rescued a few times – twice by a charming gentleman who calls himself Bob, and on another occasion by a lady. To survive, they end up having to steal for a living after their own money and clothes are stolen by unscrupulous characters (well-described, scary enough, keeping to the historic time-frame).
Before landing in 1862 London, Jamie has read a lot about a mysterious Hector Lightfoot – a veteran from the Afghan War, who worked on some secret project for the government (did it involve time-travel?) and disappeared without a trace – and his associate, Catherine Wallace, a scientist. Now, trapped in 1862 London, he and Todd have only one way forward and that is to find these two persons (here again – a lot of action, twists and turns, moving the plot steadily to the point where they finally meet Miss Wallace, who is not at all keen to listen to their incredible tale), but when Jamie mentions certain facts relating to the 20th century, she accepts that they are indeed, time-travellers and agrees to help them.
Pluses for me: The story is fast-paced, jam-packed with action, has elements of mystery and surprise, coupled to a few seriously scary moments; is well-written with excellent dialogue, suitable language for 1862, well-fleshed out main characters and enough mystery and intrigue to keep even the laziest readers interested, and of course good descriptions, both specific scene settings – the underground gang of vagabonds’ den and Hector Lightfoot’s hide-out – as well as descriptive scenes – the white stone church, the Science Institute and the horse-drawn cabs and their drivers, as well as the sights, sounds AND SMELLS of old London.
The author also does not neglect to show how the two boys’ friendship is put to the test on a few occasions, but they begin to admire the strength and special aptitudes which both have. Jamie, for example, saves the day a few times when he shoots attackers with his sling-shot and Todd bravely attacks a vagabond who tries to stop their escape.
Without giving away the ending, I would like to mention that it ends with much nail-biting action which leaves the reader satisfied as all loose ends are tied up – including the two “ghosts”. This is a well-researched, historical fiction, fantasy story which I highly recommend being in a school library, as well as being used in a class-room during creative reading and writing sessions.

Richard Smith may be contacted at the following Social Media spots:

Thank you for popping in today. Should you wish, don’t forget to COMMENT/FOLLOW our blog.  Have a tremendous Thursday!